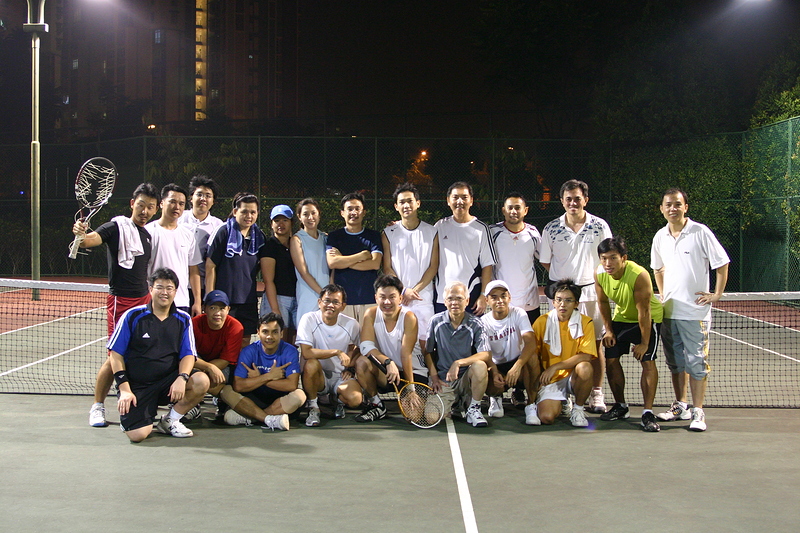 Team Rivervale hosted Team Regentville on 14 Oc 2006 at The Rivervale Condo. This was the 2nd leg as part of a 2 legged friendly match.

It was a fascinating encounter.Team Rivervale raced to a initial lead 3-1 before Team Regentville caught back. A total of 12 matches were played. Players were recycled after the 8th match. At the end of eighth match, score were even at 4-4. Eventually Regentville won back 4 more games when some of the players rotated and played their 2nd matches.Photos AND videoHightlights:The first game b/w RV strongest pair Kelvin and Ronnie against RGV strongest pair Tommy and Ray. It was a nail biting game where RV pair came from 5-8 behind to secure a tie break at 8-8 before overcoming them at 9-8. Kelvin earliest match apprehension included about 4 to 5 2nd serve faults. Perhaps he was distracted by Tommy's footfaults (although we did not count footfaults)RGV's most deadly pair were Yoshi and Rico. Yoshi was especially quick in their killing off weak returns of RV's pair of Larry and Albert. Yoshi also caught the RV pair by surprise with some quick returns on the RV's pair serves. Their kick serves also proved to be a problem for the RV pair. It was a match that was high in entertainment value due to the sheer pace of the game. Eventually the RGV pair took the game at 9-3.Julian of RV was particularly outstanding in his match with Vincent Ho against the RGV pair of Francis and Andre. He was quick and provided a stabilising influence in returning base line shots and putting in the 1st serves consistently. This trait was also apparent in his other match partnering Cliff against Tommy and Francis (9th match). In that match the RV pair raced to 4-1 lead before the RGV caught back at 4-4. Subsequently it was 5-5, 5-5, 6-5,6-6, 7-6, 7-7 before the RGV broke away to secure the match at 9-7. A particular highlight where Cliff's racket caught the ball but was deemed and protested by the RGV to have caught the net before the ball. Point was replayed and RGV won the point.The most unexpected outcome was in the match b/w RV youngest pair of John Ho and Bryan Heng (both at age 13) against a RGV older pair of Ray and Kenneth. The RV pair overcame the RGV pair at 9-7. A lot of credit must go to their certified coaches parents' Robin Ho and Roland Heng , for producing such technically competent players at such tender age. Their future looks bright for their "tennis" career indeed.Detailed Match Score (RV vs RGV)1) Kelvin/Ronny vs Tommy/Ray 9-8 (8-6 tie breaker)2) Vincent Ho/Julian vs Francis/Andre 9-73) Vincent Lee/Jean Lee vs BR/Serene 5-94) Cliff/Lye Yong vs Luis/Kenneth 9-35) Larry/Albert vs Rico/Yoshi 3-96) John/Roland vs Dennis/Juan 8-9 (2-7 tie breaker)7) Robin/David vs Damon/BK 5-98) John Ho/Brian Heng vs Ray/Kenneth 9-7RV players were recycled at end of 8th match. Match Scores were tied at 4-4 at this juncture9) Cliff/Julian vs Tommy/Francis 7-910) Ronny/Lye Yong vs Rico/Andre 3-611) Vincent Ho/Robin vs Yoshi/Damon 2-612) Albert/Kelvin vs Tommy/Francis 4-6